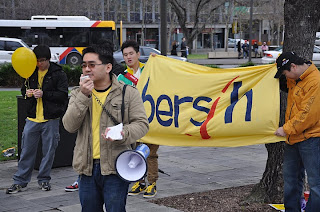 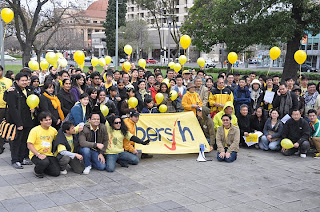 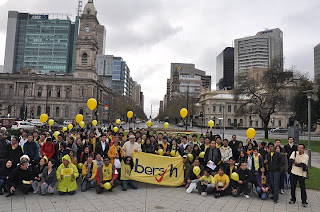 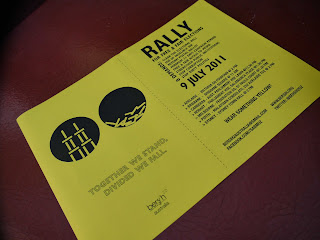 I went primarily to snap some photos for my parents, whom I knew would want to see what was happening, and of course, I was curious; but as a Malaysian, I felt compelled to go.

People were talking to one another, initiating conversations, shaking hands and introducing themselves. Volunteers gave out flyers, song lyrics, banners, place cards... There were businessmen, families, students; people from all walks of life, but everyone shared the same ideology. Everyone was there for the same reason- to support the Bersih 2.0 Sydney rally.
I reached early, and was immediately spoken to by strangers clad in yellow. I was acquainted with Dean Johns, renowned Malaysiakini columnist. Upon introducing myself as a UNSW student, I was asked,
"Did you know that the two people who started Malaysiakini were from UNSW?" 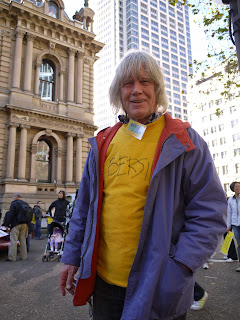 I didn't. I never even knew there were so many Malaysian students in the university to begin with.

I was surprised to know that the main person organizing this rally in Sydney was a student from UNSW as well. Perhaps the government should think about stopping people from attending this university. 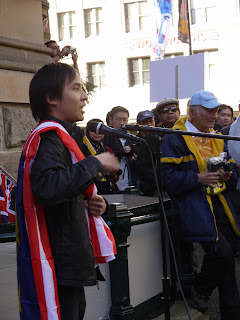 "...It is sad to be told, 'one day you will leave the country, for a better life.' That is why I am here today, studying for and working towards a better life. Spending our parents hard-earned money, cent by cent. I'm sure many of you here are here for the same reason."
Those were the words that hit me the strongest this afternoon. I could relate completely. I've been told, one too many times, to go overseas and never come back. I was told that there was no practical reason to. Now, studying a professional degree that receives no recognition back home, I could see where the rationale comes from. Many people say that we study overseas because we lack patriotism; some leer at our supposed ambition to be 'Westerners'. But is the grass really greener on the other side?
I am thankful for the opportunity to study overseas, and I try my best to be able to support myself as much as I can. I may not speak for all Malaysians studying overseas, but I certainly did not think of coming overseas to spend my evenings at wild parties. I did not once think of coming so that I could apply for permanent residency. I came with the intention to see, to experience, to learn. I came hoping to meet new people, to listen to novel ideas, to be exposed to a different environment altogether. Back home, education is fixed, actions and speech limited, and potential often disregarded. However, my home is still in Malaysia. After more than a year here, I miss home every single day. I have no intention to stay here after my tertiary education. It just doesn't feel like... Home. 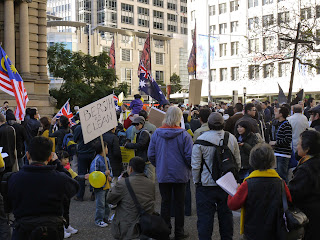 The organizer gave a special thanks to all the students who were attending the rally, addressing the warning posted on the Malaysian Students Department Australia website, which turned out to be an embarassing lie. Did I feel afraid of being present? No. In fact, oddly, I felt proud.
Person after person went up to give short speeches. Every now and then someone announced the latest updates about the chaos back home. The crowd actively boo-ed at every detainment, and cheered at every attempt to proceed.
"... People are squeezing through small alleys and lanes! The roadblocks can stop the cars and buses, but they cannot stop the minds and will of the people!"
"... I have been living here for 50 years... I have been enjoying the democracy, the liberation, the freedom of speech. If Malaysia can achieve this, we can be the strongest democratic country in the world."
"... You know it's getting ridiculous. When the government is afraid of a colour, you know that they are getting desperate."

"...In fact, the government should be joining us here today. Why are they saying no to a clean and fair election?"

"...Register as a voter; if not, gathering here ten times wouldn't make a practical difference. I've registered myself as a voter, although it took six months and three complaint letters. I will fly back whenever the next chance comes. I'm working here part-time to achieve that, but I will."

At some point, some policemen approached one of the men in yellow. I was told that "They just wanted to know what 'bersih' meant".
"And they just left?" I asked. The man smiled and said, "This is Australia! That is the difference." 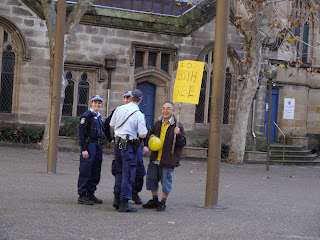 The student who organized this rally added, "All I had to do was to send an email. I didn't even have to apply for a permit. They just wanted to know when, where and how people people would attend. It's that simple."
How a true democratic country should be. Demonstrations and protests are part of everyday life here (there were four other demonstrations held before and after this one at the same venue just today). Policemen are on standby, in case anything unlawful happened. Otherwise, they are happy to not intrude, stand at a distance and watch. A public demonstration in Malaysia, on the other hand, is unheard of. 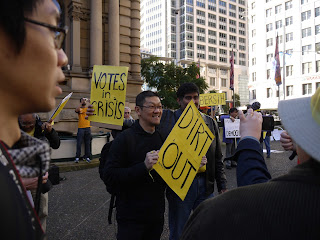 Since as young as I could remember, I was perplexed at how everyone talked of obvious conspiracies, evident lies and machinated plots- if everyone knew they were lies, why could the people responsible still get away with everything? It never made sense. Perhaps it's time for the people to speak out; to express their dissatisfaction, to show that we are not as compliant and tolerant of unreasonable deception as they thought.
It was an eye-opener. Despite the chilly weather, the crowd's enthusiasm did not seem to die down. This rally showed just how united our people can be, regardless of where in the world we are. 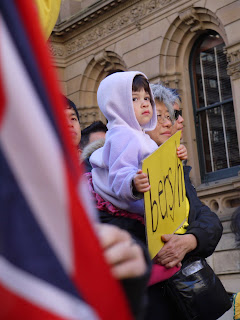 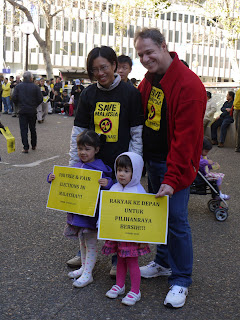 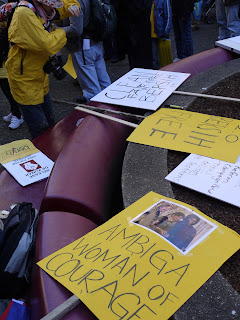 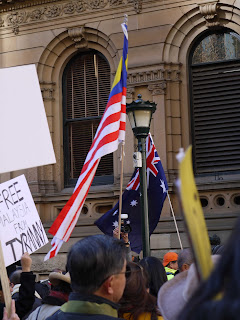 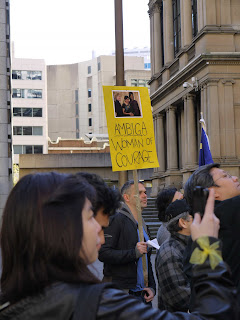 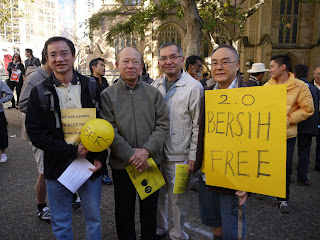 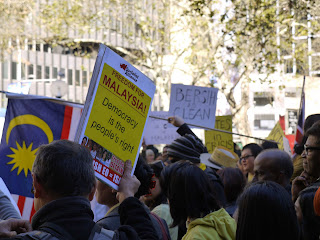 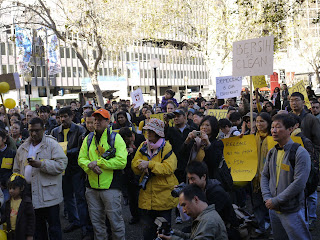 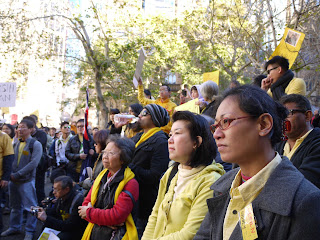 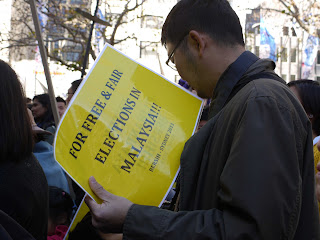 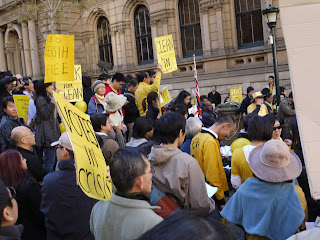 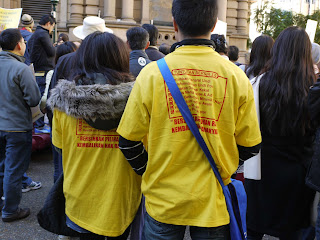 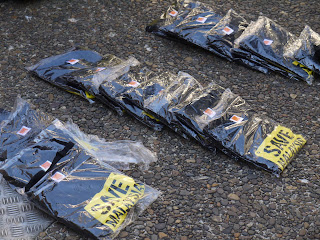 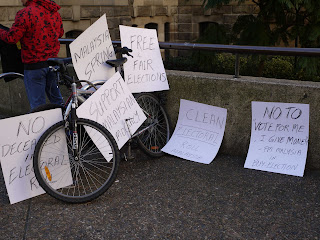 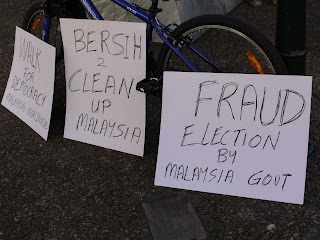 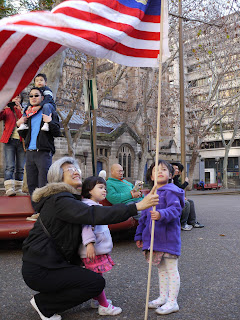 Perhaps there is still hope for Malaysia.
发帖者 薰衣草夫人 时间： 21:34

Kudos to your daughter, to you to all Malaysians, to Bersih 2.0 to the attendees, to 波波, to Douglas etc!

I do feel your daughter! when abroad to further my studies, I was asked about the political issues back in Msia, (the DPM, infamous case of sodomy case) I was embarrassed and shameful...so after years, things still look the same, yet, I see improvements, I see the people now very much aware of their rights!

I have faith, there is always hope! I came back for a reason - cos this is my home, where my parents are, my family is!

BERSIH is now global, its not only in Australia, it has spread globally, where there are Malaysians....you can see BERSIH, from HK, China, London....

I am proud to be Malaysian!

p/s so sorry for not able to express in Mandarin, I am having some Chinese input problems with my laptop.

I can't type Chinese today, forgive me. I've been reading
News on yahoo and worrying about people. Hopefully, no one gets injured.

When you are away from home, you realized our country really needed change.

proud of ourself....feel proud of all 'real bersih' member....but don leave our country just because of 'some dirty'people.....stay , pls stay.....never forsake our motherland...just like we can never abandon our parents if they r 'tortured' by some sickness.to all chinesemalaysian...stay pls stay......

Well done to the photograher and
of course to our fellow Malaysians
overseas.

Follow our signals NOW and gain up to 270% per day.

If you'd like an alternative to randomly picking up girls and trying to figure out the right thing to say...

If you'd prefer to have women chase YOU, instead of spending your nights prowling around in noisy pubs and night clubs...

Then I encourage you to view this eye-opening video to uncover a shocking secret that can literally get you your very own harem of hot women: 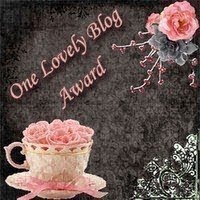